Ellis is retained by a number of local school districts to test potable (drinking) water for lead content.

BACKGROUND - Dissolved lead in drinking water is poisonous.  It can lead to nerve and brain damage, particularly in exposed children.  Lead can enter a school's water supply in one of two ways:

CASE HISTORY – So far, results from testing at different schools have been fairly consistent; lead has been identified in a small percentage of water fountains at each school.  So let's use the first school tested as an example:

METHOD – At every site tested, Ellis collects two representative samples from each water fountain ("source point").  From each source point, the two samples are collected as follows:

RESULTS – The EPA has published an "action level" for lead of 15 micrograms lead per liter (15 ug/l).  Here is what we found at the example site:

SUMMARY -  Again, using the above site as an example:

Why is lead in drinking water of concern?  Lead is an ingestion hazard, that is, poisoning by swallowing.  Exposure via contact with surface dust or paint chips MAY sometimes be delayed or reduced by infrequent contact and washing of hands (hygiene).  But because drinking water is ingested directly, exposure to lead poisoning is immediate. 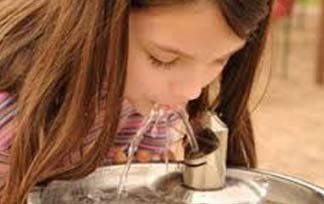